The First Mention of Love

25 Apr The First Mention of Love 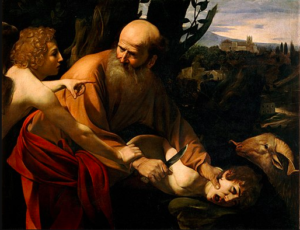 The Sacrifice of Isaac by Caravaggio

During Easter Vigil at my church, I was invited to share a brief meditation on Genesis 22. The theme of the evening was the ever-building victory of God over sin and death in the history of God’s people. As such, we heard meditations and experienced live performances in a variety of art forms on the Biblical narrative in the Old Testament starting with Genesis 1 and culminating in Ezekiel 37, as we waiting in anticipation for the dawning of Easter morning and the history-splitting revelation of the resurrection of Christ. In a short 5-minute reflection, I shared about God’s first revelation of love, which occurs in this very passage. I hope and pray it speaks to you now as it spoke to me to prepare and share this reflection then. It is still Easter, after all. He is Risen!

Imagine this moment with me.

You have been a pilgrim for the past 25 years. Instead of the stability, safety, normalcy that you had know for the first 75—seventy five—years, you have wandered in lands not your own, among people not your own.

You’ve heard God promise you big—no, outrageous—things, and you’ve had arguments with Him under the stars. He has spoken, and though it has seemed completely crazy, you have obeyed, leaving everything you knew in order to see God’s will done, His promises fulfilled.

You walked in infertility for two and a half DECADES. Month after month, year after year, you and your wife—who is, by the way, just as old as you—have ridden the rollercoaster of hope and disappointment. Belief, and despair. Over and over again.

And, yes, you doubted God. You took things into your own hands. You forced and manipulated the story—who wouldn’t?—to make life happen. Ishmael. Your first born son.

But God wasn’t done with you. Your stumbling, He took it all in stride. In the face of your faithlessness, He was still faithful.

Isaac, son of your laughter, was born.

It was a time of deep joy, a time for settling in to all that God had given you, stewarding it well, and living into the life He had promised you.

You thought your wandering, your crazy days of following God into the unknown were done.

And then, God shows up again.

It’s in this context, 22 chapters into the book of Genesis, that God calls Abraham’s name. We can feel this story so deeply—the tense journey to mount Moriah, the moment that—if we’re truly honest—turns every parent’s stomach, makes every parent ache to hold their child (no matter how young or old) just a little closer.

Abraham binds his son, what he now believes is his only son after sending Ishmael and Hagar into the wilderness, and places him on the altar. He raises the knife.

And let’s not sanitize this, by the way. Isaac isn’t an infant. He knows what’s going on. Scholars debate an exact age, but Isaac is anywhere between 15 and 25 years old at this point.

The knife is raised, and an angel of the Lord stops Abraham’s hand. In a moment that points forward in time—hundreds and hundreds of years forward—God provides a substitute for the offering, a pure act of grace. Then it is the ram, but soon it will not a son of man to be offered, but the very son of God.

But let’s back up again.

Because there’s a moment before this, a tiny, seemingly unimportant moment, the moment when God comes to Abraham, who has walked through so much, given up so much already, and calls him by name.

Abraham, the one who has muddled through and messed it up, says to God, one more time, Here I am. At more than 100 years old, he says, Yes, God, I’m up for whatever’s next.

And whatever’s next is LOVE.

That’s the moment. Right there.

After 22 chapters, years of stories, this is the very first time the word LOVE is used in the Bible.

Oh, you’ll see it in the English, but the Hebrew underlying those translations is hesed, loving-kindness.

This time, in this encounter, God introduces us to LOVE (aheb) for the first time.

Let that sink in for a moment.

Love isn’t the romantic, flowers and chocolate love that the world sells us. It’s not even love between a man and a woman. It’s the love of father to son, in the context of sacrifice.

What God is showing us, what Abraham and Isaac are participating in, is real love.

Love that gives away the beloved with open hands. Love that offers the one it loves as a sacrifice. Love that is obedient unto death.

The first thing that we hear God the Father saying about Jesus in all four of the Gospels is this: This is my son, whom I love.

If we know Genesis 22, if we know what real love is, we know how this story is going to end.

And this time, it isn’t with a ram, with a life spared and a sacrifice redeemed.

This time, it isn’t about our efforts, our obedience, our faithfulness.

It’s about God’s effort, God’s obedience unto death, God’s faithfulness to us.

And we don’t have to clutch our children close, because God didn’t clutch close His son. He opened His hands and showed us what love really is.

For God so loved the world…