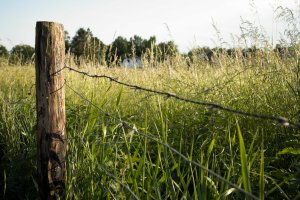 When I was about 13 years old, I spent many of my Saturdays building fence with my grandfather. (Yes, I mean “building fence” and not “building fences”—it’s a Kansas farm boy thing, I guess). Because he had a shoulder injury that caused him to be permanently disabled, I did most of the hole digging, post driving, and wire stretching, but unless one of his friends stopped by to visit or he just got too cold to stay outside, he was with me for the work. It didn’t matter to me that most of the physical labor was mine to do. I didn’t care that he would occasionally bark orders when I wasn’t doing the job just right. I was just happy to be with my grandpa, earning a little money and learning important life skills.

The day usually began by him picking me up at 7:30 am or so. We would leave my house and then drive to The Red Maple, the local family restaurant in my hometown, for a hearty breakfast. Because, “You can’t build fence on an empty stomach.” Then we would drive out to my grandparent’s place in the country, gather supplies, my grandpa would have a cigarette (or two), and we’d get to work.

On particularly cold days, we would take more frequent breaks. We would sit in the shop where the wood stove was always burning while my grandpa smoked Kool kings and told stories. Sometimes he would reminisce about his childhood, the time he and his brothers built the dam for the old pond by hand; just a few boys with shovels. Or when he and his brother went to California for the summer to work on the railroad when they were fourteen and fifteen and lived in a tent in the front yard of the twelve year old girl that would eventually become my grandmother. Sometimes he would tell stories about hunting in the Sandhills (the local name of the area where he grew up and lived until he died). And nearly always, he would tell a story that I wasn’t sure was actually true but he would swear on his life happened just the way he told it to me. When one of his friends would stop by, the tales got taller and my work breaks sitting by the stove in the shop would last much longer.

It’s funny, as I try to remember some of the stories he told, the details are vague at best. I’m sure I’ve forgotten the vast majority of them, but the feeling those memories stir in me is as present as if I was sitting by that wood stove right now. I can smell his menthol cigarettes, the wood smoke and hot metal. His voice, his laugh, his gestures when he would get wound up telling a story, those are indelibly etched in my memory. I don’t remember much of what he said, but I remember him. And as I think back, I realize how significant it was to be a 13-year old boy whose grandpa picked him up on Saturday mornings and, more than the breakfasts or the stories or the work ethic or the life skills, gave him a safe place to become and belong.

That’s what being “with” does. When one offers the gift of presence to another, they are making a space where we can become and belong. We find groundedness there with them, even when the rest of our life may feel unmoored. To find a person who will hold this kind of space for us is indeed a rare gift.

In 1997, Fred Rogers received the Lifetime Achievement Award at the 24th annual Daytime Emmys. During his acceptance speech he did something that must be etched in the minds of everyone who attended. I know that it is etched in mine. As he was accepting the award, he said; “All of us have had special ones who have loved us into being. Would you just take, along with me, ten seconds to think of the people who have helped you become who you are . . . ten seconds of silence, I’ll watch the time.”  Then he pulled up his coat sleeve and looked at his watch. There was a giggle that rippled across the audience. But as the camera began to pan across the room filled with television and film stars, people started to realize that he was serious. In that moment, tears began to fill people’s eyes. The room got very quiet as people began to remember those who had loved them into being.

Everytime I see that clip, (which you can watch here), my grandpa comes to my mind. His presence was a safe place for me to find my way. May you too find safe places to be loved into being, dear friends.